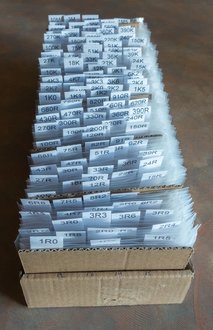 Resistors are the most fundamental of electronic components. Our "standard" collection covers a majority ​of available values (ohms values) in a 1/4W size, and should be good for 99% of what you will ever need.

Labelling
I have used the labelling convention where 'R' replaces the Ohms symbol and the decade indicator appears in place of a decimal point, Hence 1R5 for 1.5 Ohms, 1K5 for 1.5 kilohms, 1M5 for 1.5 megaohms. This is the system used in manufacturing and stock control systems to avoid ambiguities.

Quality
These resistors are "cheap Chinese", bought as a hobby pack. They are not the best. For instance, the leads are very thin. Compare the leads on the 1K1 reistors (which came from elsewhere) with the others. Nevertheless, they are fine for hobby use, and were ever so cheap! eBay source

Accuracy (tolerance)
No resistor is the exact ohms value it claims to be. The accuracy, or deviation from the advertised value, is called tolerance. Most of these resistors are claimed to be 1% tolerance. This is really hard to check without an expensive, calibrated meter. However, my tests indicate a unit to unit variation of around 1%. That suggests manufacturing process that is badly controlled - for 1% resistors I would expect to see maybe 0.1% variation. See statistical process control for an explanation of my view on this.

Long term stability
Resistance values change over time. The hotter a resistor gets, the more likely it's value is to change. That include heat applied during soldering. The long term stability of these resistors is not spacified.

Wattage
Quoted as 1/4W. The wattage rating of a resistor is not an absolute. Naturally if you disspipate 10W in a 1/4W resistor the failure will be pretty absolute, pretty quickly. If you dissipate 1/4W in the same resistor what will happen is that its value will likely drift more than if you dissipate 1mW, so after a period of time it may have changed by a significant amount. If you dissipate 1/2W in it, it will get ugly and discoloured and possibly fail, eventually.

The dissipation in a resistor is given by the fundamental equation P=R*I*I or P=V*V/R where P=power dissipated, R = resistor value, I = current through the resistor and V = voltage across the resistor.

Voltage rating
These resistors are not suitable for voltages over maybe 100V. Do not use them for current limiting in a mains circuit.

Colour coding
Small resistors like these have their Ohms value and tolerance encoded in coloured rings. Good luck with trying to read them - since 1% metal film became the basic type, they have been all but impossible to make out. If you look at the 5% carbon file ones (1K, 10K) you will see the difference.
Powered by